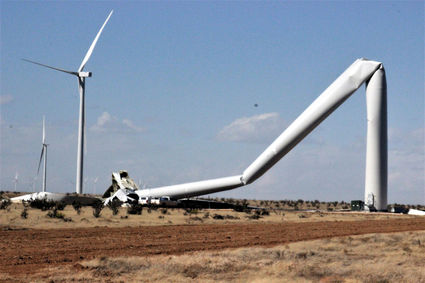 Giant industrial wind turbines have an economic lifespan around 15 years, after which the chances are that they’ll be left to rust in some idiot’s back paddock.

Decommissioning these things properly at a sizeable wind farm would run into the hundreds of millions. Then there’s the toxic waste.

Already, thousands of 45-70m blades are being ground up and mixed with concrete used in the bases of other turbines erected later or simply dumped in landfill. Which should worry locals: the plastics in the blades are highly toxic, and contain Bisphenol A, which is so dangerous to health that the European Union and Canada have banned it.

Following that theme, Tony Thomas takes us on a tour of our wonderful wind powered future.

It’s good to know that wind turbine blades are a bird’s best friend, or something like…