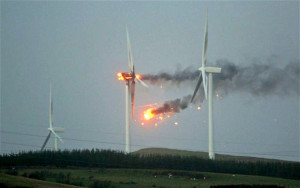 Warm yourself by the heat from this burning wind turbine…

Unprincipled to the highest degree, the Greens will relentlessly push for damaging environmental action like wind farms and massive solar arrays… as long as it’s for other people.

Environmentalists are supposed to like wind farms. They provide renewable energy and are seen as a key part of the energy transition as Australia attempts to lower its carbon emissions to meet its Paris Agreement obligations.

But former leader of the Greens, Bob Brown, has come out swinging against a giant new wind farm planned for Robbins Island, in the north-west corner of Tasmania.

He says it is in the wrong place, will ruin the view and kill endangered birds like the Tasmanian wedge-tail eagle and the white-breasted…