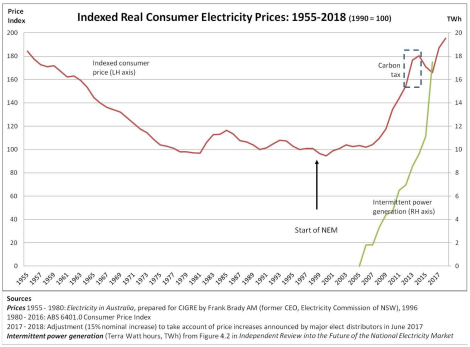 Chaotically intermittent and heavily subsidised wind and solar have sent power prices soaring in Australia. Barely a generation ago, Australians enjoyed the lowest power prices in the world, now they suffer the highest. And it took a little over a decade – see above.

In a helpful exposition of Australia’s self-inflicted power pricing and supply calamity, Alan Moran details the causes and consequences below.

Alan was prescient in his forecast of summertime blackouts – his article was published just a few days before 29,000 South Australian households and 200,000 Victorian households (not to mention dozens of energy hungry businesses) were unceremoniously dumped from the grid during a hot spell, which coincided with dramatic collapses in wind power output in both states.

In the salad days prior to 2015, before governments’ destructive interventions undermined…