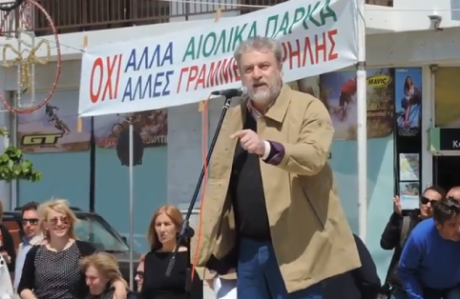 The Greeks can claim many things: weird and wonderful mythical gods and creatures (think Zeus and Poseidon, Pan and the Minotaur); deep thinking philosophers, such as Plato and Aristotle; and mathematicians well ahead of their time, think Archimedes and his bath-time ‘Eureka’ moment.

Another claim worth crowing about is their ‘get-your-hands-dirty’ take on democracy, requiring worldly erudition and oral persuasion.

600 years before the world’s most famous Red Sea pedestrian set foot in the Holy Land and started upsetting the Romans among others, the Greeks had already built an institution based on open public debates.

The ecclesia or ekklesia was where all male citizens would assemble in ancient Athens to thrash out the City State’s policies on everything from military strategy, waging war and electing the officials of state. Persuading a crowd numbering 6,000 or more of your fellow citizens in the days before amplification and giant screen billboard TVs must have taken some kind of oratory skill. No doubt heckling from the mob would have made it all the harder.

Following that fine Greek tradition, on 23 April Euro parliamentarian Notis Marias took to the stump to address a crowd rallying in defence of the Natura protected area of Southern Karystia, Euboea.

The video of the rally appears below but for those not gifted in Greek, here’s an English translation of Notis’s stirring speech.

Association for the Protection of the Environment of Southern Karystia

Greetings to the residents of Southern Karystia.

We greet the struggle of the stockbreeders, the farmers, the beekeepers, who want to see real development where we live, development of the primary sector, which can give us prospects for the future.

We greet the struggle of those who work in the tourist sector in a region where there is tourist development, in a region that can develop even further. We greet the struggle of the proprietors who have their own land and who don’t want, don’t accept, don’t consent, to what the Greek state is about to do, seizing their land, representing their land as supposedly forest land, and in their next move handing it over to TAIPED (fund for utilization of private property in the public sector) so that it can be sold to the lenders. This is the reality.

We greet the struggle of those who want real development in our country but don’t want a takeover of the mountain ranges, of our mountains, by the industries of the wind parks which for a mess of pottage want to establish themselves. They have already occupied the mountaintops in all of Greece. They are installed illegally and struggle supposedly for development, but in reality all they do is pocket the subsidies. Those are the facts of the matter.

I come here to be with you and support you in your struggle and to tell you that from tomorrow the subject will come up in the European Parliament. We will raise the subject immediately. Let the European Union face up to its responsibilities, because the subsidies that are given are from the NSRF (National Strategic Reference Framework). They are European money. And it is up to them to tell us: is there a Natural system in this area, which is supposed to be protected by the regulations of the European Union?

Because the moment of truth must come, when they take a position, responsibly. So the first thing that will happen on my part – because I have said in the European Parliament that I play on the Greek national team: I am not playing party politics and I struggle for the Greek people – is that we will raise the matter with a question to the Commission itself. And secondly I call on you to contact the Committee on Petitions of the European Parliament – we have taken many different issues to it – so that you can become a presence. The voice of the residents of Southern Karystia must be heard in the European Parliament to put an end to this nonsense. We are not going to let the big multinationals grab our land. The battle is going to be fought by all of us united together.

But to give some information, very simply, about what is going to happen, because some people don’t believe it.

Secondly, Denmark, which is regarded as the country that has the most wind turbines, produces 5,000 megawatts of wind energy. Denmark as a whole produces that amount. Here they want to build facilities that will produce around 20% of the electricity produced by Denmark. This place is going to become huge building site. A big factory, an industrial park in effect.

There is nothing coincidental about it. Just as it is no coincidence that forty years ago they wanted to build a nuclear power station here. This area provides opportunities for those who want, without contributing a penny themselves, to come and play at being investors. For a start these “investments”, as they are called, get a 40% subsidy from the NSRF. They receive money that could go to finance production in the primary sector, for the development of the country.

Secondly, wind energy is subsidized by all of us. It is included in the bills of the Public Power Corporation. And the existing proposal is that this subsidy be multiplied. If these gentlemen want to present themselves as investors we challenge them to do what was decided a few days ago in Germany: to agree to make their investment without any subsidization, not of the electricity and not from the NSRF. Otherwise they are freeloaders playing at being investors.

Having said that, the situation is as follows: Why did they choose this area? Because here it is very close for them to transmit, without having to pay the cost of transmission, their electricity either to Aliveri or to the Public Power Corporations’ station in Sounion. And it’s very close to Athens. Because this is what it’s about: they want to concentrate here 50% of the country’s wind power production, because it’s next to Athens. These are the great investors. These are the people who are said to be bringing development.

So we say these simple things: firstly, energy and water are public goods and they must remain here for the Greek people, publicly owned. Secondly, and many know this: the first to have started the production of wind energy were the Public Power Corporation, from the 80s. But now the Public Power Corporation has only 3%. Why? Because the vested interests did not want public involvement in renewable energy sources. They have all gone into private hands. But because some of those private hands are also lenders, one of the companies is the state power corporation of Italy. So foreign state companies will be able to generate electricity here, to have resources of strategic significance at the same time as our own state company is not allowed to do this. A public power company which as you have seen is being sold off. 17% of its shares are going to TAIPED to be sold off. This is the reality and all of us should know the reality.

Firstly: all of us agree that we should have renewable energy sources. Secondly, we want energy to remain a public good. Thirdly, you can’t have hyperconcentration of renewable energy production only in one area. Fourthly, they say that wind parks reduce CO2 emissions. They are not telling the whole truth. Studies in Denmark have shown that there has not been any such reduction. For the wind turbines to function they have to have support, a backup. From what? From the conventional units for electricity generation, using either lignite or something else. So, behind every instance of production of wind energy it is presupposed that there will be conventional production of electricity. We do not have the reduction that is advertised in relation to these issues.

So, what must be done? Firstly, there must be a decision that it is not possible in one area like South Karystia to have all the production of wind energy concentrated. That is unacceptable. On the basis of the principle of subsidiarity, in every area there should be the corresponding involvement and support. You said it yourselves. The citizens’ groups said it.

What has been done has been done. This is the end. The end of the nonsense. From now on nothing more is going to be built. We are resolved to struggle to end this unacceptable situation. Secondly, because there is the Natura system the European Union says that these kinds of changes are not allowed. And if they are programmed the first prerequisite is that there should no other solution.

Other solutions are possible, in many different areas and in all of Greece. And the most important of these: let them invest the wads of money they are said to have in other areas, in remote areas. On remote mountain tops. And let them pay the transmission costs. Not install them here and put a line over to the other side because the distance for transmitting the power is short.

So I think that this information is quite useful at this moment for all of us. And they also say that wind parks provide work places. With one slight difference: that they provide work places in the states that produce the turbines and the wind generators. In Denmark. That’s where they provide work . Very few workplaces are created here once they begin functioning. They are only for the construction phase.

Tourism will be wrecked. The agricultural economy will be wrecked. Stockbreeding, beekeeping, everything that generates income in this area. And of course we will also have the danger of fires because this network will be a hundred kilometres in length, if I’m not mistaken, a hundred and thirty kilometres in length, and there will be an increase in all these dangers.

It is not possible for us to accept the visual pollution and the noise pollution, the industrialization of the Greek landscape and the breakup of the area.

On the way here I met a friend who is from Andros and he told me they are waging the battle there too. Because it’s our common battle. It’s the battle of the Greek people. We are not going to allow the lenders to seize our land.

We are not going to allow energy to pass into the hands of private interests. We will not allow the NSRF subsidies to support processes of this kind. We want renewable energy sources. But let them be balanced, with small-scale units that benefit local communities, units that will support the income of every area. And as we said, and you say, enough has been done here.

So our greetings to this struggle, which we regard as very important. We invite all the citizens of this district to support the struggle of the co-ordinating committee. To strengthen it. For this is our common struggle. It includes us all. And for my part, I say it again, from tomorrow, in Brussels, the issue of Southern Karystia will be in the front line.

We struggle all together, we struggle for Greece, we don’t want the lenders to seize our land. Let’s be strong. Together in struggle. Let’s go forward together. Thank you.
Source