With Californian carpet-bagger, Elon Musk swooping on South Australia to scoop up as much as he can of the $550 million its hapless Labor government is about to squander on non-fixes for its self-inflicted wind power disaster, it’s time to put pen to paper to work out just how risible is SA’s plan to rely on giant batteries. Here’s Paul Miskelly and Tom Quirk crunching the numbers.

South Australia – a Renewable State?
Watts up with that?
Paul Miskelly and Tom Quirk
15 March 2017

With $90 billion spent on batteries and 4,000 MW of more wind farms, South Australia could be a totally renewable state, at least for electricity.

There are many combinations of renewables that could be considered with wind, solar, biomass, pumped storage and various storage technologies. The following is the simplest, combining wind farms and batteries.

The starting point for this analysis is the dominance of wind power in South Australia. To expand this renewable source we must add battery storage as there are no present alternatives. The present 1575 MW of wind farms meets some 35% of demand and expanding this to give an average 100% of supply. We must store the surplus and use that when the wind falls away. The performance of the present demand and wind farms supply is sampled from AEMO data for 3 January to 31 March 2016.

So wind farm output is increased by 358% to 5644 MW, an additional 4069 MW of wind farms, so that the average over 3 months equals the average demand. This is presented in Figure 1 and shows periods of surplus and deficit of supply.

The total surplus is equal to the total deficit and the detail is shown in Figure 2. There are periods for example 17 to 24 January 2016 where the average deficit is 750 MW for 168 hours, a total of 125,000 MWh. This is a measure of the energy storage that is needed from the surplus energy of the period 13 to 17 January. For the year 2016 the demand in South Australia was 14,400 GWh so the storage need is of the order of 1% of the demand for the year.

The variations in storage needs are shown in Figure 3. The maximum storage need is defined as the value necessary to satisfy demand at all times. This is a value of 270 GWh (270,000 MWh) for the period analysed. This is 2% of the annual demand for electricity in South Australia.

The challenge is to identify storage technology for some 300 GWh of supply. The base case is to calculate the amount and cost of lead acid batteries to satisfy this need.

On the bottom far right of the figure, the hydrocarbons (fossil fuels) show energy densities of a factor of ten greater than the batteries considered here.

But this could be realized, but at what cost? Estimates of lead acid battery costs are around $0.20 per Wh while lithium-ion batteries vary from $0.50 to $0.90 per Wh. The Power Wall 2 lithium-ion battery from Tesla is A$8,000 for 14 kWh but this is a retail price of $0.57 per Wh. The wholesale bulk price could be as low as $0.30 per Wh with better performance than the lead acid battery in discharge rate and lifetime.

Willem Post has a detailed article on energy storage in Germany. His base case is lead acid batteries with massive, bulk energy storage. The cost per Wh is $0.32.

So the battery storage is some $60 to $90 billion to store the surplus energy from 4,000 MW of new wind farms with substantial running costs due to battery lifetime and erratic discharges.

This analysis outlines the storage required to address wind’s inherent intermittency. It does not address the requirements, presently unaddressed by wind energy technology, of grid stability and control, which is the need for the provision of synchronous inertia to protect grid stability. Should the battery route be chosen to address this requirement, such provision may indeed require more battery storage. 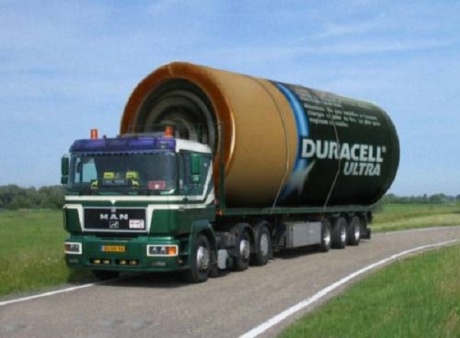 Renewables wouldn’t exist without massive subsidies and/or Soviet era government mandates and that same observation follows for subsidy-soaked power storage. None of it makes economic sense: pull the plug on the subsidies and the firms behind them disappear like snowflakes in summer. And the business models of some are so shaky that they collapse even when the subsidies are still flowing.

I had to shake my head when reading the recently published Fox News report: Another taxpayer-funded energy company files for bankruptcy.

According to Fox News, Pennsylvania-based Aquion Energy had received “a $5.2 million stimulus-tied grant” (not a loan) from the U.S. federal government and that the company had once been “touted as a rising star in the energy storage business”. It even attracted “an investment from Microsoft founder Bill Gates“.

“North American Company of the Year”

In January (2017), the company was named ‘the North American Company of the Year Award’ at the annual Cleantech Forum in San Francisco…”

This is a classic example of how a house of cards gets built and begins to collapse. It should remind us of what can happen whenever bureaucrats and politicians get so caught up in a pie-in-the-sky idea that they literally become deaf to technical, scientific and economic reason.

There was certainly no lack of warnings from skeptics that renewable energies (mainly sun and wind) were fraught with daunting technical and economic obstacles, and that the technology for overcoming these obstacles still remained decades out into the future.

But green energy proponents wanted to hear none of it, and so embarked on a blind and reckless money give-away of the sort never seen before. Already trillions have been earmarked worldwide — one trillion in Germany alone.

Today the green energy subsidy folly has since made its way down through multiple supply tiers as the government funds tens of billions of dollars to prop up the junk science that tells us us we need the green energies, which in turn also receive hundreds of billions in subsidies. This in turn has led to billions in subsidies made to companies claiming to have the technologies for overcoming the technical hurdles that the rest of us had long warned about.

What’s next? As expected these companies are now folding. It was a scam all along, as they were never as close to solutions as they led many of us to believe. Now the government will have to subsidize the many workers who are losing their jobs, at least for awhile, as scheme implodes on itself. What a folly.

Naturally almost everyone supports funding for the development of new energy technologies, but there is a huge difference between pitch-forking tax dollars, by the billions, into a huge crony feeding trough, and wisely and strategically allocating precious funds to the right places.

Unfortunately the green industry has been one driven by cronyism, and not technical or scientific merit — and certainly not economics. It has been a huge bonanza for very few at the great expense of the common good. The hundreds and hundreds of billions wasted would have been far better invested elsewhere.

The storage solutions come from the past, not the future

When it comes to efficient energy storage, putting a man on the moon is in fact easy compared to finding a new way that stores energy even a fraction as well as a chunk of coal, a bottle of gas, or can of petroleum does. In fact we find the storage solution millions of years in the past in the form of fossil fuels, and not the shady, over-hyped half-baked technologies of today.

There are all kinds of future energy storage solutions out there. But so far most of them hold little or no promise of even coming close to being economical. It’s going to take years or decades to develop them, and we have to be smart about how we do this. We cannot continue pouring money on something that will never work.

Yet, until bureaucrats wake up to this truth, expect many more Solyndras and Acquion Energy debacles in the years ahead.
No Tricks Zone