Hi everyone, here’s a very important message from Liberal Leader Steven Marshall. A MUST read ! 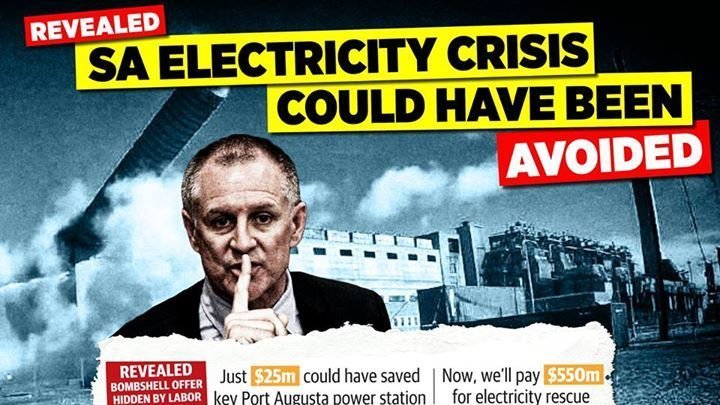 South Australians need to know the truth about what the state Labor government have done, what they failed to do and that they tried to keep this SECRET !

Today 29/3/17 it was revealed on the front page of The Advertiser that the Port Augusta Power Station could have been kept open with a $25 million investment from the State Government.

Since the Port Augusta Power Station closed we have had power blackouts costing our state hundreds of millions of dollars, electricity prices have soared, and the Government has been forced to develop a $550 million electricity bailout package to attempt to fix the appalling mess that they have created.

Labor wanted to keep the proposed deal SECRET. They fought to prevent the details being released. It is now in the public domain, thanks to information provided to the Liberal Party, for all South Australians to see.

Jay Weatherill’s decision not to back the Port Augusta proposal has resulted in the greatest act of economic carnage on the South Australian economy since the State Bank collapse in 1991.

If you are as outraged about this as I am, please click on this link and help spread the word on social media by liking, commenting, and sharing this Facebook post:

I will be pursuing this horrendous scandal in the Parliament this week and we will be demanding Jay Weatherill face the consequences of his appalling decision.

Jay Weatherill has failed the people of South Australia, he can’t even keep the lights on – it’s time to pull the plug on Jay!