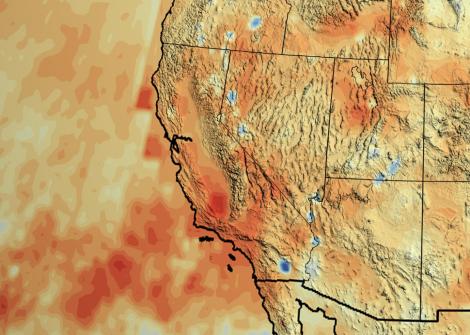 California’s accumulated precipitation “deficit” from 2012 to 2014 shown as a percent change from the 17-year average based on TRMM multi-satellite observations. CREDIT NASA/Goddard Scientific Visualization Studio

A new NASA study has concluded California accumulated a debt of about 20 inches of precipitation between 2012 and 2015 — the average amount expected to fall in the state in a single year. The deficit was driven primarily by a lack of air currents moving inland from the Pacific Ocean that are rich in water vapor.

In an average year, 20 to 50 percent of California’s precipitation comes from relatively few, but extreme events called atmospheric rivers that move from over the Pacific Ocean to the California coast.

“When they say that an atmospheric river makes landfall, it’s almost like a hurricane, without the winds. They cause extreme precipitation,” said study lead author Andrey Savtchenko at NASA’s Goddard…